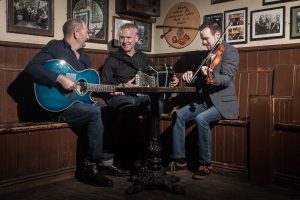 Breaking Trad is made up of Dónal Murphy (Accordion), from Abbeyfeale,West Limerick, a winner of numerous All-Ireland titles on both Button Accordion and Melodeon, Niall Murphy (Fiddle) from Camlough, South Armagh, a winner of multiple awards including All-Ireland Senior Fiddle competition, Fiddler Of Dooney and Fiddler of Oriel, and also Mike Galvin (Guitar/Vocals) who has vast experience working in a wide range of musical styles from Rock and Roll to Irish Traditional. Between them, they have toured extensively around the world, performing at major festivals and music venues and touring with some of the biggest names in several different music genres including Four Men and a Dog, Cara Dillon, De Dannan, Dance star Michael Flatley, Bluegrass guitarist/singer Dan Tyminski (Alison Krauss and Union Station), Country legend Randy Travis and many more.Their music has been described as ‘Dazzling’, ‘unorthodox and unique’, and ‘high octane’.

“Breaking Trad are reviving Irish music with a fresh and modern twist with powerhouse tunes and exquisite vocals.”